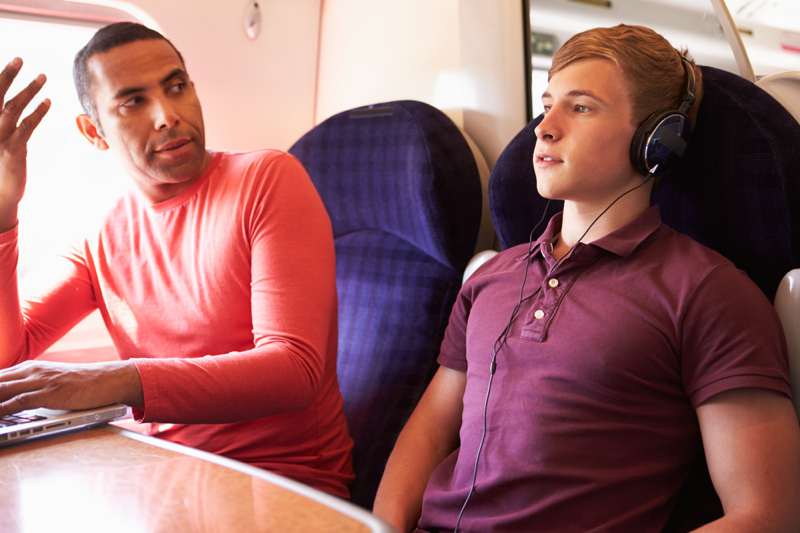 Public transport can be a nightmare. If you use it to get to and from work, you’re either (a) very grumpy going to work or (b) very tired after a long day’s work. So, there are some people you just don’t need to be sharing your journey with. Recognise any of these?

The guy with his iPod on too loud

This guy is either partially deaf, or will be if he keeps on these listening habits. He’s so loud, you can hear his music through his own earphones It’s 8:30 in the morning, so he’s naturally decided to blast out rave music for the other sleepy passengers to listen to. The louder and more repetitive it is, the more soothing it is too his ears. It’s really a problem, but most people on board are too nice to say anything to him/her (usually him). You don’t want to be ‘that guy’ asking him to turn it down, so you just tut and shake your head subtly as your anger rages within.

You feel like an old grandpa being annoyed by the group of teenagers sat at the back. But would it kill them to keep the noise down a bit? Unlike the guy with headphones on too loud, they shamelessly just play songs on their phone out loud. They’re also avid rave fans too. You’d love to say something but they’re like a pack of hyenas so you just keep your head down and remember when you were their age and were just as irritating.

The person who doesn’t let anyone sit beside them

When climbing aboard, you look round for a vacant seat. With only one seat available, the person next to it has placed their bag in a defiant attempt to claim it as their territory and is stoically looking out of the window. You’d love just to be a pain and just sit on their bag, but you decide to stand instead.

Babies get confused when on public transport and decided to scream and scream and scream for the entire journey. The mother does the best she can but the baby won’t budge and continues howling. You feel like going over there yourself and giving him a cuddle if it’ll make it stop, but you’ll probably end up getting arrested.

With toddlers, the parents are trying to discipline them, so they try to ignore their screaming in order to not give in. If they want ice cream, they’ll scream and scream until their mother agrees. But the mother refuses to budge and will gladly allow him to continue wailing. Again, you feel like offering money to buy ice cream yourself but don’t want to feel the wrath of the mother after criticising her parenting strategy.

Beautiful girls are unlikely to sit beside you, and it’s always the old sweaty and overweight man who plonks himself next to you. Suddenly, legroom becomes scarce. His stench invades your nostrils. You spend the rest of your trip looking out the window that you’re almost squashed against. You realise you should have imitated the smug person who puts their bag on the seat beside them.

You’re starving and just want to go home and have your dinner. The last thing you want to see is someone scoffing down some food. Do they have to be so loud? You can hear every crunch they make. They’ve even brought a drink to wash down the taste, and you can hear every slurp that goes down their throat. You eventually catch a scent of their food, and your stomach grumbles ever louder.

As men we’re expected to be gentleman. However, gone are the days when you just offer a woman a seat. You want to be a nice guy, but not a patronising man still living in the 1950’s. At what age do you start offering women your seat? Should they be in their forties? Fifties? You don’t want to seem patronising, but you don’t want to be the dick that left someone’s arthritic nan standing on the bus while you kept your seat to your lazy self.

Another nightmare is the woman with a big stomach. Is it a baby or perhaps one too many pies? Do you leave a pregnant woman standing up or do you insult a fattie? You’re not sure which is the bigger risk.

If you’ve forgotten your iPod or it has run out of battery, you’ll have no choice but to eavesdrop on other people’s conversations for entertainment. They’ll be giggling to each other, understanding their own inside jokes, and talking about people who’ve never heard of. You wish you could turn around and tell them to speak about something more interesting, or at least go into a bit more detail with what they’re talking about. They’ll start showing videos on each other’s phones, usually of someone falling over and laugh hysterically to each other. You want to watch the video too, but can’t. Asking ‘Can I be your friend?’ will just mark you out as the bus weirdo.

The two people who bumped into each other

Two best friends chatting behind you can be annoying enough, but it’s even worse when two people barely know each other and force themselves to sit beside one another. These are people who work together, or used to go to school together, and know each other but only at a casual level. With friends you get inane chatter, but here you’ll get forced small talk at cringe worthy levels. You’ll be squirming yourself once they’ve reached an awkward silence.

The person on the phone

Some people just enjoy talking on the phone in the knowledge that everyone’s listening. They’ll mention about how they are on the bus, and how they’ve plenty of time to chat. This is even worse than the two friends chatting because you can only hear one side of the conversation. Chances are he/she has plans tonight and are getting all excited about it. Once again, you don’t find the jokes very funny. If this person finally hangs up, don’t assume this will be the end of it. It will ring again!

If any of these ring a bell and your journey to and from work is a nightmare, then maybe there is only one option: learn to drive. After all, you don’t want to be using public transport all your life, do you?

As Margaret Thatcher once said, “A man who, beyond the age of 26, finds himself on a bus can count himself as a failure.”

Only joking, of course! Happy travels!