If you’re a driver, you’re bound to have come across most of these idiots on the road. If you haven’t, well, then you’re probably one of them!

Most cyclists are fine but there are a few who can really grind people’s gears. These are the rogue cyclists, who want to be given the same status as a motorist, but only when it suits them. They don’t stop at a red light, they don’t indicate which direction they’re going, and think they can get away with murder.

Cyclists on their own can be bad enough, but groups are torture. When cyclists cycle together, they decide to not follow each other closely behind, but rather take it upon themselves to take up the entire lane. If you’re trying to get anywhere on a Sunday, beware, they’re a nightmare.

Young drivers get cocky. They’ve just turned 17, and saved up enough pocket money to buy themselves a car. Turns out their mummies let them drink too much fizzy lemonade, which made them stay up past their bedtime to watch The Fast and the Furious. Now they think they’re Vin Diesel and can do anything out on the road. They’ve got fancy spoilers and wheels, spent a fortune on the engine, but no matter how hard they try they’re still driving a crappy Fiat Punto. They will overtake you at the most inappropriate time, speed when it’s unnecessary, and just be a complete nuisance in general.

Young drivers are cocky, but old drivers are too careful. They’ll drive on the road at a snail’s pace, and don’t seem to care that there’s about 50 cars behind them. The retired life has given them plenty of hours in the day, so there’s no need rush, and they’ll be happy to shout at us youngsters for going over 20 MPH. They’re usually driving something like a Daewoo Matiz with a long queue of motorists behind them having nervous breakdowns.

Let’s be honest, some (but not all!) BMW drivers can be a bit of a tool. They are quite possibly suffering a mid-life crisis and trying to relive their youth through a fancy car. This means speeding, and aggressively tailgating anyone who isn’t speeding.

Even if you are speeding a bit, the BMW driver will be sure to go that extra mile to out speed you. They transfer their own sense of entitlement onto the road, and would rather have bruises from a car accident than a bruised ego. They drive a fancy car, and therefore, that makes them superior to the rest of the road, and don’t have time for other pleb cars like yours.

We remember being a learner ourselves, but it’s just really hard to be patient when they’re driving at 5-miles an hour. Have they learned to indicate yet? You don’t know. Can they brake properly if I move closer? Again, you don’t know. If they are driving past a place you can’t overtake, this will be a nightmare.

“Don’t worry about the 50 angry drivers behind you; you’re doing fine,” their instructor will reassure them. God help you if you’re behind them on traffic lights. It’s at green and he’s still working on what gear he’s in. For God’s sake – move!

Drivers talking on the phone

This person loves yapping on the phone so much, she couldn’t wait to simply pull over and answer their precious phone call. It’s against the law to do this, but this doesn’t seem to bother them. It’s an important call. Their best friend has just seen there’s a sale on in Primark! She’s also probably putting her make-up on at the same time.

This can also include bus drivers, van-drivers and anyone who drives a vehicle bigger that everyone else. A lot of trucks drive very slowly but you can’t see in front of them. You find yourself trapped, as you desperately want to overtake them but can’t see the road in front of you where you want to move. They could move across a little but they don’t; they’re like the bullies of the road. They’re bigger than you and they want you to know it. Usually driven by fat sweaty men literally on the verge of a heart attack, so probably best not to confront them.

Down rural roads you can have an old farmer driving in his old weather-beaten tractor. These are the slowest vehicles known to man; slower than if he just rode on the back of one of his sheep. The farmer could well have trailer with hay bails shooting out the top, so you can’t even see in front of them if you want to overtake. He’s used to the slow-moving rural life, so doesn’t know the meaning of the word fast. Sometimes traffic in the city can be better than being down the country with this lot.

The person who blares music out of their car 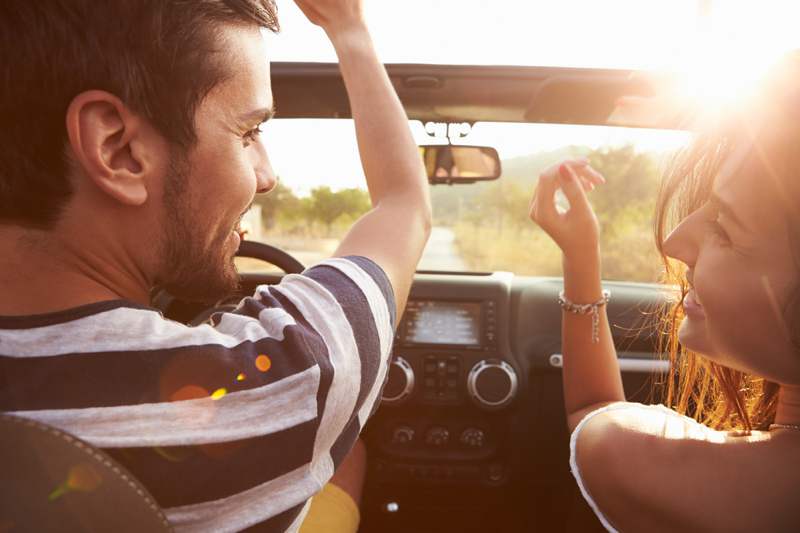 This guy has loud music coming out of his car, and he’s pretty much more concentrated on what part of the song he’s into rather than what’s going on in the bleedin’ road. Get stuck in traffic with this guy, and you’re personally forced to listen to his own special DJ set. Hard House, Gabba and Donk are particular favourite musical genres of theirs, and they want to share them with the world apparently.

Seeing a police car in your area means that you are on high alert. You’ve been driving down this road safely within the limit every day, but the sight of the Old Bill makes you paranoid. Do you drive extra slow in order to show them you’re a careful driver? But, that makes it look like you’ve got something to hide! There’s no good thing to do apart from pray to God that they turn off quickly.

DISCLAIMER: Just in case there are any officers of the law reading this article, we would like to assure you that the last paragraph was sarcasm and we think you are essential in maintaining the safety of our roads…. ahem.